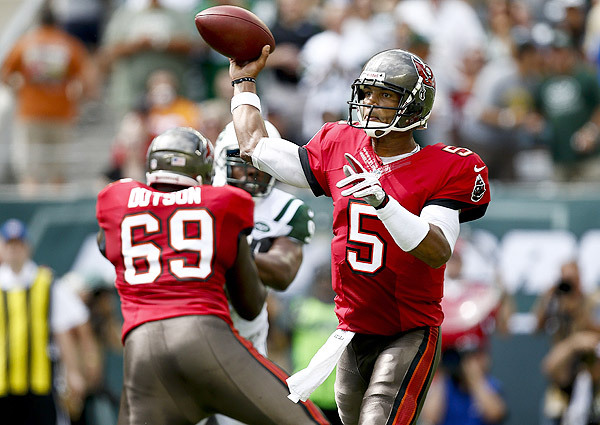 The Bucs host the New Orleans Saints in Week 2 on Sunday at Raymond James Stadium. Here are three things to keep an eye on:

1. Josh Freeman. This could be number-one for quite awhile the way things are going. We’ve heard a lot about #5 recently, and much of it isn’t positive. He was not chosen as a team captain. Then he recently missed the team photo. There are rumblings about his relationship with Greg Schiano. Simply put, Freeman has to have a big game against the Saints, otherwise fans are going to start calling for rookie Mike Glennon to take over.

2. The offensive line. This unit could get a boost if Carl Nicks returns to action, which he claims he’s ready to do. He did not play in the opener due to a MRSA infection. The Bucs need to get Doug Martin and the running game going to take some pressure off Freeman. Speaking of that, the O-line also needs to do a better job in pass protection.

3. The penalties. The Bucs had 13 of them against the Jets for over 100 yards. Five of those penalties resulted in first downs. Then there was that flag on Lavonte David at the end of the game. All of those mistakes gift-wrapped a win for the Jets. If a similar scenario plays out on Sunday, we can only imagine what kind of field day Drew Brees will have.