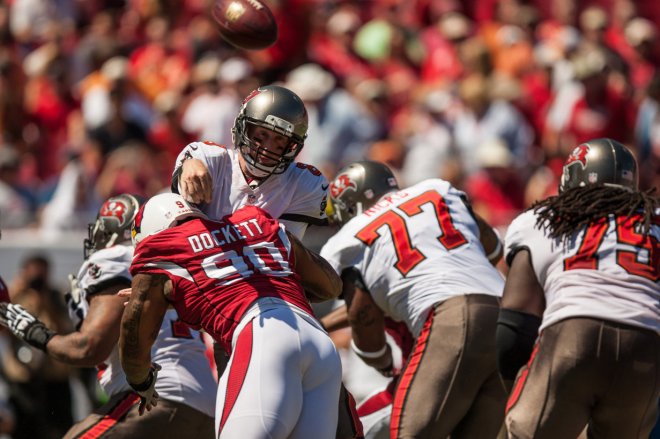 Talk about snatching defeat from the jaws of victory.

The Buccaneers had a 10-0 lead over the Cardinals on Sunday heading into the fourth quarter. The Bucs were starting a rookie quarterback, who played like…well, a rookie. Yet with the game on the line, Tampa Bay found another way to blow it.

There is one play in particular that has Bucs fans calling for Greg Schiano’s head (again.) With just over three minutes remaining, and nursing a seven point lead, the coaching staff called a pass play with Tampa Bay deep in its own territory. Mike Glennon picked a bad time to throw his first career NFL interception. Patrick Peterson picked it off, and on the very next play, Carson Palmer found Larry Fitzgerald for the game-tying touchdown.

Glennon had a chance to mount a comeback in the final minute. But he was picked off by Peterson again, and that was that.

Glennon finished 24-of-43 for 193 yards and a touchdown to go along with the two picks. He had some good and some bad moments, typical of what you’d expect from a rookie making his first start. Mike Williams caught the scoring pass in the first quarter. Doug Martin could only muster 45 yards on 27 carries against a Cardinals’ defense that’s among the best in the league in stopping the run.

The defense is not the problem here. This unit has been playing fairly well, and Sunday was no different. They intercepted Palmer twice, including the first by Darrelle Revis as a Buc. When you only give up 13 points, you normally have a good chance of winning. But these are anything but normal times in Tampa.

So now, the Bucs are 0-4, and fans are furious with Schiano and offensive coordinator Mike Sullivan. It’s hard to argue with that, since Tampa Bay has scored a measly 44 points through the first quarter of the season. Will we see another change soon?

The Bucs have their bye week next week. Praise the Lord for that.