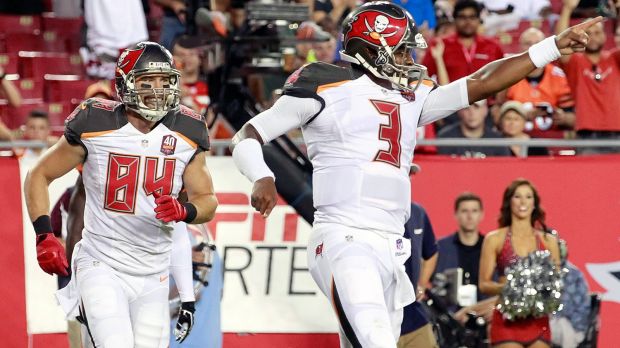 Tampa Bay fans: there is reason for hope.

There was a lot to be excited about in Monday night’s preseason victory over the Bengals at Ray-Jay. Jameis Winston looked great. Doug Martin looked like the Doug Martin of his rookie season. Heck, even the defense sacked Cincinnati QB’s a few times.

I know, I know: it’s only preseason. But how could you not like what you saw in the first half of that game? I will only talk about the first half, because all of the stars were out of the game in the second.

Let’s start with Winston. Man, he has cannon for an arm. He marched his team right down the field to start the game, capping it with a scramble to the right pylon to open the scoring. Jameis finished 8-of-13 for 90 yards before limping off the field in the second quarter. It doesn’t appear to be a serious injury, and the Bucs did the right thing taking him out of the game at that moment.

Speaking of injuries, hopefully the one suffered by Mike Evans isn’t critical, either.

Martin also looked great while he was in there: six carries for 59 yards, including an impressive 30-yarder on the opening drive. We haven’t seen this from him the past two seasons. Hopefully this is a return to his rookie form, when he rushed for over 1400 yards.

The defense sacked Andy Dalton three times. Let me repeat that: the defense recorded three sacks. We haven’t said that much over the past few years. Gerald McCoy looked like the leader he’s believed to be. Altrerraun Verner had a Pick 6, courtesy of A.J. Green having butterfingers.

There was one problem area that still needs to be addressed immediately: the penalties. The Bucs had 14 of them for 153 yards, most of them coming in the first half while the starters were still in there. Penalties were a huge problem last year, and on Monday night, it seemed like there was a yellow flag on the field on almost every other play.

Still, a win is a win, even in the preseason. And Monday night’s performance gave Buccaneer fans reason to at least hope that things could be different in 2015.