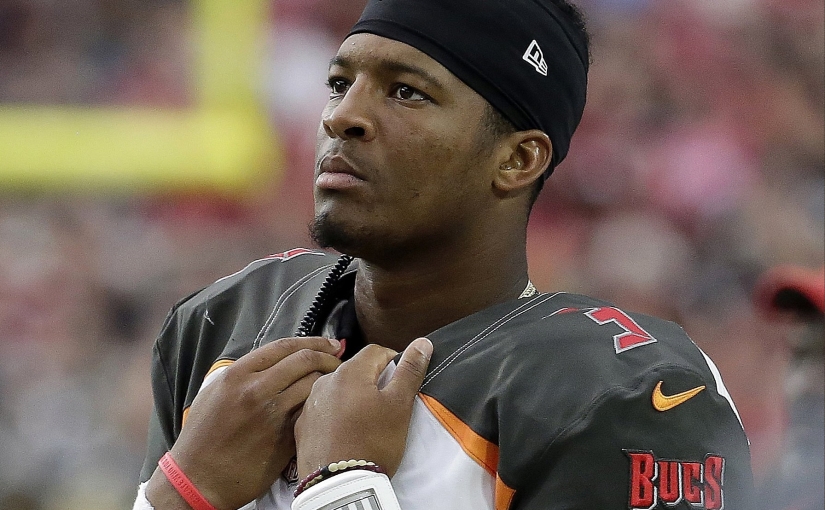 With the Buccaneers on their bye week and sitting at 2-4, it’s time to use this break in the action to do some finger-pointing at four areas that I think deserve to be singled out.

Jameis Winston.  You have to start with the quarterback, right?  Winston’s had some good games this season, and then he’s had games like the one in London where he was responsible for six of the team’s seven turnovers.  He has plenty of critics.  He also has a lot of supporters.  You may be surprised to hear about the latter, but if you read what I read on social media, it’s true.  Winston’s defenders will tell you that the bad pass protection, receivers dropping the occasional big play, the secondary giving up too many points, are bigger problems.  Well, they’re all right.  But the bottom line is, Winston’s been too inconsistent.  And in his fifth season as the number-one overall pick in the pick, that is disappointing and unacceptable.

The offensive line.  This group has given up 25 sacks, tied for second most of the NFL with the Jets.  Only the Titans (the Bucs’ next opponent) is worse.  The running game is still largely non-existent.  Tampa Bay is ranked 23rd in rushing.  A lot of fans will say some of those sacks fall on Winston holding onto the ball too long.  I’ll buy that.  But the overall numbers don’t lie.  The GM also deserves some blame here.  More on that in a moment.

The secondary.  It’s been awful for several years now, and this year is no different.  The Bucs are dead last in pass defense, allowing over 300 yards a game through the air.  And yet, Tampa Bay is best in the league at stopping the run.  But with the dreadful coverage in the secondary, you’re inviting teams to throw the ball 50 times a game.  The Bucs have spent many, many draft picks on this area.  They’ve changed coaches.  They’ve changed schemes.  And yet, there’s been no improvement whatsoever.  That brings me to my fourth item.

Jason Licht.  He drafted all those guys in the secondary with no improvement.  Doesn’t he deserve some of the blame for this unit’s failure?  I think he does.  Licht has also done little to address the offensive line.  Doesn’t he deserve criticism for that as well?  I think he does.  He was the only one to survive the housecleaning at the end of last season.  Many fans, including me, don’t think he should survive this one if Tampa Bay keeps playing like this.

I am a diehard Tampa Bay Buccaneers fan living in New England. See - not everyone around here is a Patriots' fan. Eventually the Bucs will be good again. Eventually. View all posts by briwillwerth