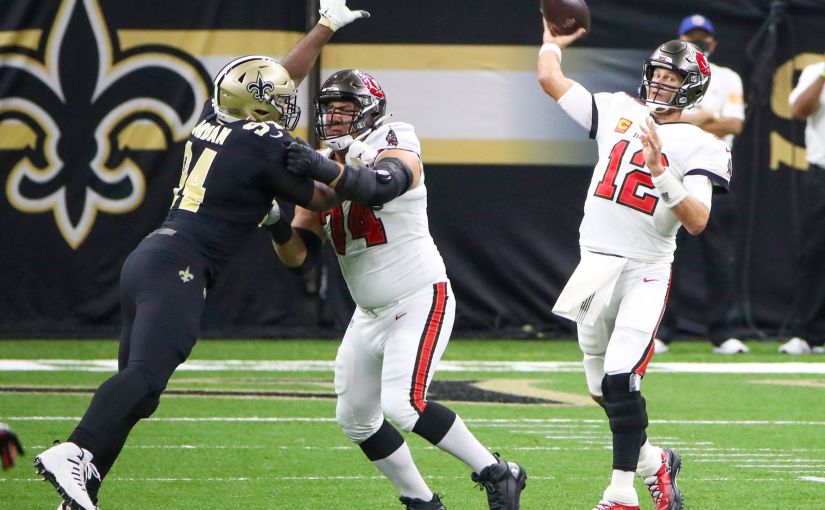 Let’s pretend, for a moment, that Tom Brady wasn’t the starting quarterback for the Tampa Bay Buccaneers in 2020.  If you watched Sunday’s game against the Saints, you’d think were watching….a typical Bucs game.  Tampa Bay fell to New Orleans, 34-23.

This was a game where, yet again, the Bucs made too many mistakes to overcome.  But since this was Brady’s Tampa Bay debut, all of the spotlight was shining on him.  His first drive was great, capped off by a QB sneak into the end zone that Patriots fans saw so many times.

After that?  My goodness.

Brady threw two interceptions in this one.  The first was a miscommunication with Mike Evans.  The second was a bad throw that resulted in a pick-six for the Saints.  Brady looked out of sync with his receivers for much of the game.  I think that will improve as he gets more reps with them.

But before everyone hangs Brady out to dry, this was a team loss.  I wrote in my season preview about my chief concerns: the running game, the offensive line, the young secondary and the kicking game.  Well, the running game was a struggle yet again.  The pass protection was not good at all (why is Donovan Smith still our left tackle?)  The secondary actually played pretty well until Jamel Dean got burned in the fourth quarter.  And the kicking game is still a mess: new kicker Ryan Succop had a field goal blocked.  Another special teams mistake: the what-were-they-thinking moment on that botched kickoff in the fourth quarter that resulted in another turnover.

Another problem: penalties.  The Bucs were the most penalized team in the league last year.  On Sunday, they were penalized nine times for 103 yards.  Why can’t this team ever be disciplined, regardless of who’s coaching them?

Rob Gronkowski wasn’t a factor. Evans wasn’t a factor, though his hamstring injury may have had something to do with that.  I hardly heard LeSean McCoy or Cameron Brate’s names mentioned.

This was just one game, against one of the best teams in the NFL.  There is still time to make adjustments and turn this thing around.  Hopefully they can, or we’re looking at another season of the same ol’ Bucs.