The Buccaneers’ 2020 schedule is out, and get ready to see them a lot in prime time.

Thank you, Tom Brady and company.

The Bucs will play a record five night games.  Yes, that is a franchise record.  Of course, some games could be flexed in or out of certain time slots, but for now, Tampa Bay is scheduled to play five games under the lights: on the road against Chicago, Las Vegas and the Giants, and home games against the Saints and Rams.  All five of those games are over a span of seven weeks. Many other games are set for the coveted late-afternoon time slot as well.

Oh, and we get Brady vs. Brees right off the bat to open the season in the Superdome.

Without further delay, here’s the schedule.  Time to start planning some road trips.

The 2020 NFL Draft is in the books, and it looks like the Buccaneers did a great job addressing their greatest needs.

This team has neglected the offensive line for years.  Not this time.  The Bucs used the 13th pick – trading up a spot with San Francisco – to take  OT Tristan Wirfs from Iowa.  This guy is huge, and that’s an understatement.  Apparently, he’ll start at right tackle, but can easily switch to LT because of his versatility.  Protecting Tom Brady is a top priority.

I don’t follow national college football that closely, and thus don’t really know much about any of the draftees.  But the Bucs got a safety in the second round, addressing their secondary.  They also drafted a couple of running backs to hopefully jump-start a running game that has been non-existent for several years.  Ronald Jones has yet to have a break-out season, and Peyton Barber is now in Washington.

The next big day on the calendar is the release of the NFL schedule.  We already know who and where the Bucs will be playing, but we will soon know when.  I’m eyeing the day when they go to Vegas.  Hopefully there will actually be sports by then.  I hope everyone’s staying safe in the meantime. 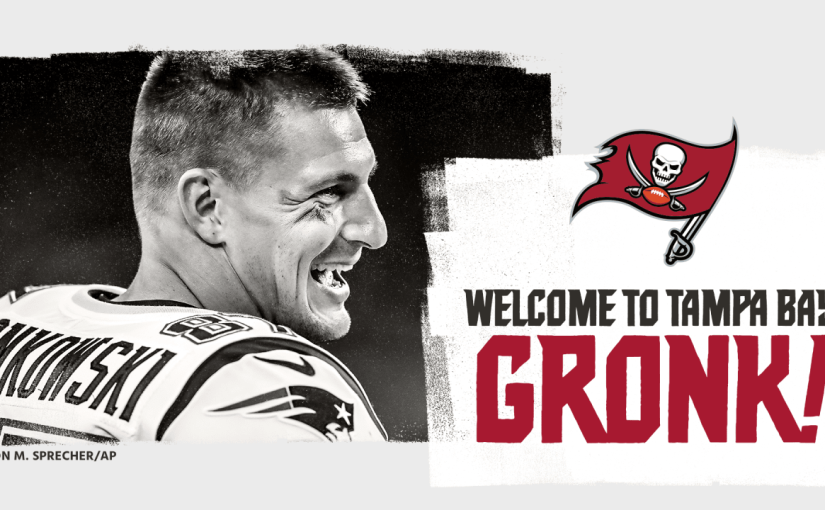 So, let me get this straight: not only is Brady a Buccaneer, but so is Gronk.

Yes, the Bucs made it official Tuesday night what had been reported earlier in the day: they traded a fourth-round pick in this year’s draft in exchange for former Patriots tight end Rob Gronkowski.

Gronk retired from the NFL last year and went on to pursue a career in professional wrestling.  And we all know what a party animal he is.  Well, now he’s un-retiring, and reuniting with the quarterback who’s thrown 90 touchdown passes to him over the years.

Think of Tampa Bay’s offense right now: Brady, Evans, Godwin and now Gronk.  The Buccaneers now have three tight ends when you add Howard and Brate to the equation.  Bruce Arians doesn’t use tight ends much in the passing game.  You’d have to think that’s going to change now.

But at a time when sports are not happening, the Bucs are currently the talk of the sports world.  When was the last time we could say that?

Hopefully they address their needs during the upcoming draft.

Okay – we have this whole numbers game figured out without any drama.

Tom Brady will still wear No. 12.  And Chris Godwin, who used to wear that number, will now switch to No. 14.  Godwin offered Brady his longtime number, and it goes without saying that TB12 accepted.

I’ve liked Godwin from the beginning, and this classy move makes me like him even more.  When you talk about the Bucs’ receivers, it used to be, “Mike Evans is a stud.”  Now, it’s “What a two-headed monster they have.”

By the way – the Buccaneers teased today that the new uniforms are coming out one week from today – April 7.  The anticipation is building.

Everybody stay safe out there during these challenging times.  It’s rough on all of us, but we will come out of this stronger than ever.  And God bless everyone on the front lines of this pandemic. 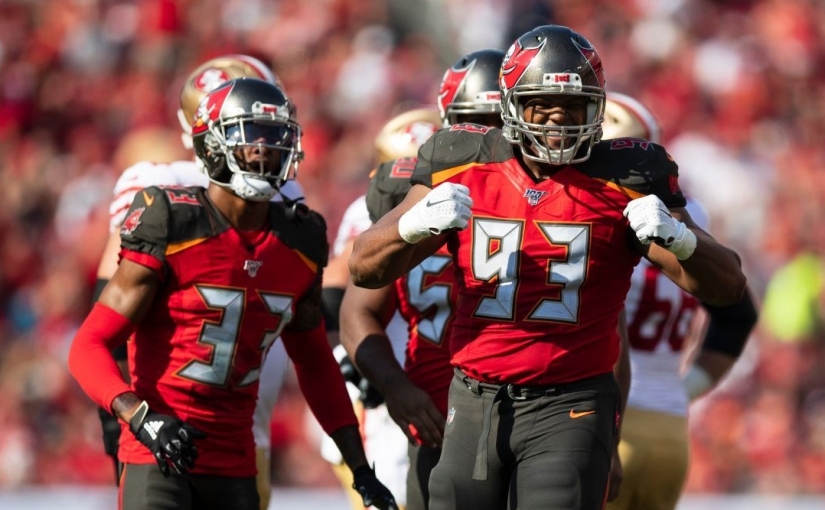 With all the hoopla surrounding the Tom Brady signing, the Buccaneers have quietly secured most of their stout defensive line from last year.

On Thursday, Ndamukong Suh signed a one-year deal.  So, he, Shaq Barrett and Jason Pierre-Paul will all be back next year.  The only linemen who won’t return are Carl Nassib (Oakland) and Beau Allen (New England.)

One of the lasting images I have of Suh from last year is his fumble return for a touchdown to seal the upset victory over the Rams in L.A.

The Bucs were the #1 defense against the run last year.  There’s no reason to believe they won’t be near the top next year.

What a month it’s been for the Bucs.  If you’re not excited by now, I don’t know what to tell you. 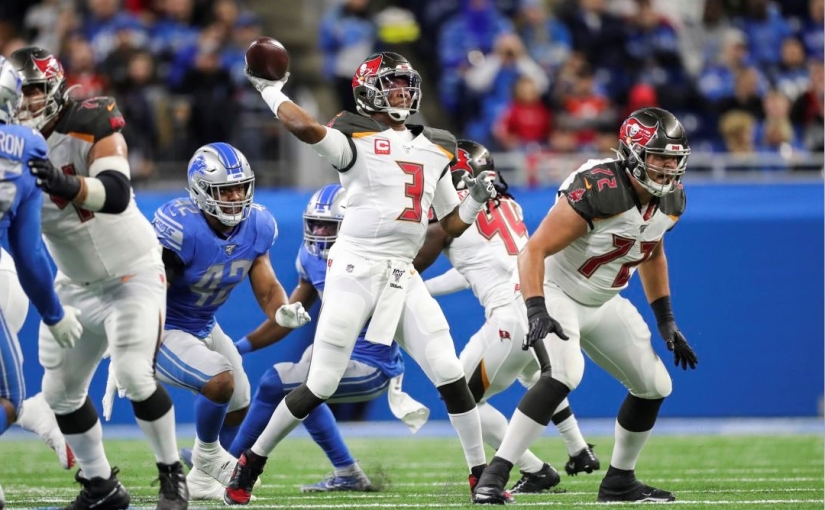 Now that Tom Brady is officially the new starting quarterback of the Buccaneers, it’s time to say a few words about the man he’s replacing, Jameis Winston.

Winston won’t be back.  He already posted on social media that he’s moving on, saying he loves Tampa and “I look forward to seeing y’all again in February.”  Interpret that how you may.  As of this writing, another team has not picked him up.

Do I feel bad for him?  Sure, I do.  He had five years here as the starting quarterback, and didn’t always have the strongest supporting cast, especially in pass protection and pass defense.  He threw for almost 20,000 yards while he was in Tampa, including over 5,000 last year.  He threw 121 touchdowns in five years.

But he’s gone because of the mistakes.  The 30 interceptions did him in.  He threw 88 picks in five seasons.  He also lost 23 fumbles, and while you can argue that some of those were the result of poor offensive line play, the numbers speak volumes.  He cost his team a lot of wins, though he certainly isn’t the only Buccaneer I can say that about.

Some team will pick him up eventually.  He may have to compete for a starting job, or maybe not.  But I wish him well.  He’s got plenty of talent.  If there’s a team out there that can get him to make better decisions, then he definitely has a future in this league. 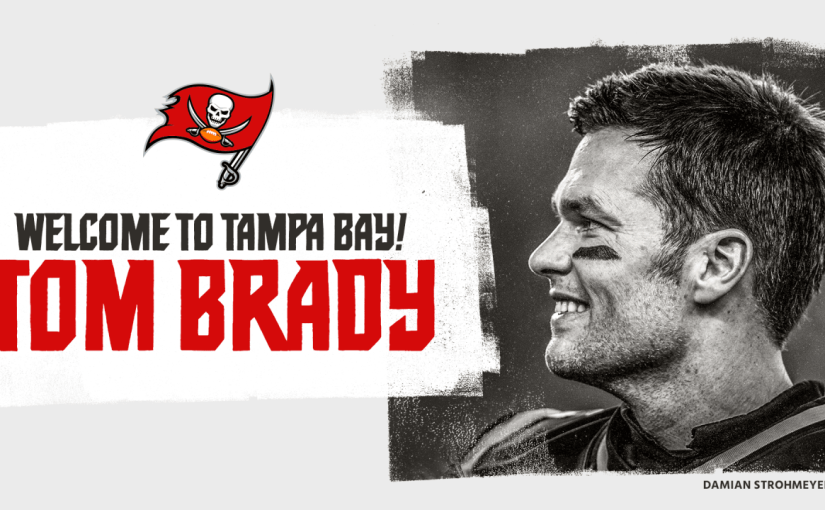 It’s official.  It’s really happening.  Sure – I’ve been hearing about this news since Tuesday night, but being a diehard fan, I wanted to hear the official announcement.  And on Friday morning, I did.

Tom Brady – the greatest of all time – is now the Buccaneers’ new starting quarterback.

A month ago, there’s no way I could’ve pictured this happening.  Even when Tampa Bay was mentioned as one of the teams in the running for Brady, I considered it a longshot.  Well, people who know me know that I’m usually wrong more than I’m right.  I did it again on this one.

There’s no need for me to mention all of Brady’s accomplishments.  You know them all – highlighted by the six Super Bowl wins.

Can a 42-year old quarterback really bring a championship to a team that hasn’t been to the playoffs since 2007?  We’ll see.  The offensive line needs more.  The Bucs don’t have much of a running game.  And the pass coverage, while showing improvement late in 2019, still needs some help.  And it wouldn’t hurt to draft a quarterback in next month’s draft, since Brady isn’t going to be in Tampa for very long.

But man, this is exciting with a capital E.  The Bucs have struggled mightily to fill up Ray-Jay, and when they do, it’s usually because of thousands of visiting team’s fans.  I have a feeling we’re going to see some sellouts in 2020.  Those visiting team fans will still be there, but Bucs fans will occupy the rest, and drown them out.