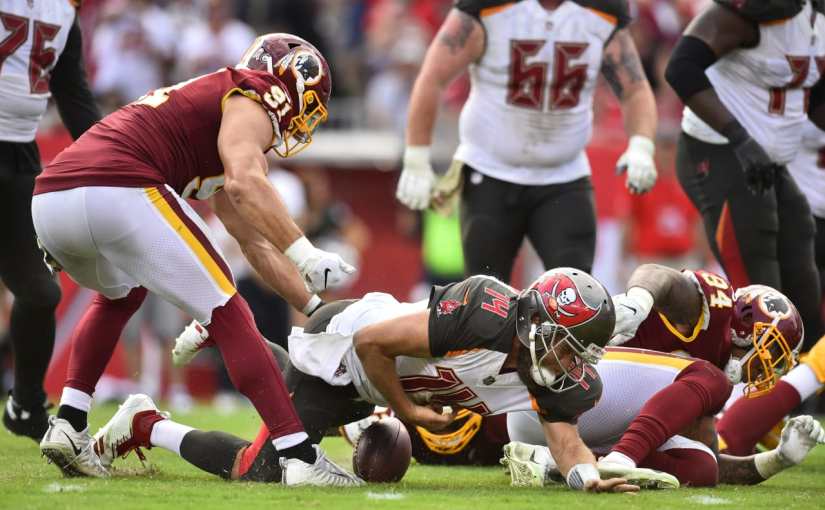 Here’s how misleading stats can be.  The numbers will tell you that Tampa Bay had almost 500 yards of offense against Washington.  Based on that, the Bucs still have one of the best offenses in the league.  But what that number doesn’t tell you, is how much this team self-destructs week in and week out.  Two interceptions, two lost fumbles, two (more) missed field goals.  And most of that happened in Redskins’ territory.

Oh, and Dirk Koetter acknowledged after the game that this was the first time all year that’s he’s called the plays.  The Bucs scored three points in this game.  Yeah, that sounds about right.

Heck, the defense had what was arguably its best game of the season.  The Redskins got less than 300 yards of offense and only scored 16 points.  Everything’s relative, of course.  However, this unit still hasn’t forced a takeaway since temperatures were in the mid-70’s around here in greater Boston.

So now what?  Do they go back to Jameis Winston at quarterback?  Ryan Fitzpatrick has been making just as many as mistakes over the past couple of games.  I ripped Winston for bad decisions, and I’m not going to let Fitzmagic off the hook now, either.  Tampa Bay has 25 turnovers this season.  You guessed it: that’s worst in the NFL.

Keep drinking, Bucs fans.  No amount of alcohol can completely satisfy us at this point.

File this one under the “better late than never” category.

I took this video when I was at Ray-Jay last Sunday, but am just getting around to putting it on the site now.  Hope you enjoy it.

Tampa Bay Buccaneers wide receiver Mike Williams is out of the hospital, one day after being stabbed.  Police say Williams’ brother is a suspect.

To read more on this story from ESPN, click here.

To read a statement from the Bucs, click here.