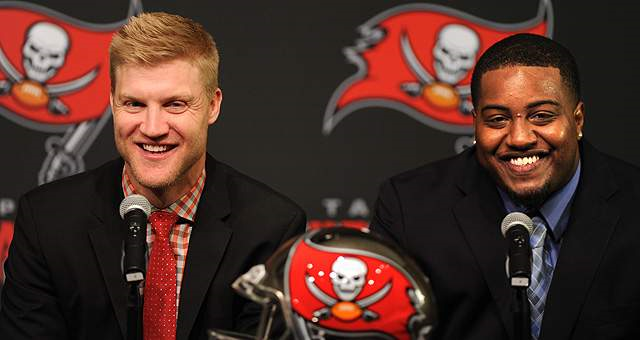 What a week it has been for the Tampa Bay Buccaneers. That’s not much of a surprising statement, given that the start of free agency always results in a lot of activity around the league. But I wasn’t expecting it to be quite like this.

It all started even before free agency began, when word leaked out that the Bucs were shopping Darrelle Revis. He ended up signing with New England. One year and $16 million later, he’s out of Tampa. That didn’t take long.

So who’s new? They picked up cornerback Alterraun Verner from Tennessee, and defensive end Michael Johnson from Cincinnati.  Verner had five picks for the Titans last season. And two years ago, Johnson had 11 1/2 sacks for the Bengals. Throw in former Seattle defensive tackle Clinton McDonald, and it’s clear Lovie Smith and Jason Licht are overhauling just about everything on the defensive side of the ball. A few extra sacks this season would be a nice return on this investment.

There is also a change on the offensive line. Donald Penn is gone, and Anthony Collins is now a Buc. Like Johnson, Collins spent the past few years in Cincinnati.

But the biggest surprise may have come at the quarterback position. Josh McCown signed a two-year, $10 million contract. Signing a QB may not be a shocker. What is surprising, is that Lovie Smith has pretty much named McCown the starter already. So there won’t even be any competition with Mike Glennon? Will the Bucs draft a rookie QB in the draft? Who knows if we’ve heard the last of this quarterback situation. 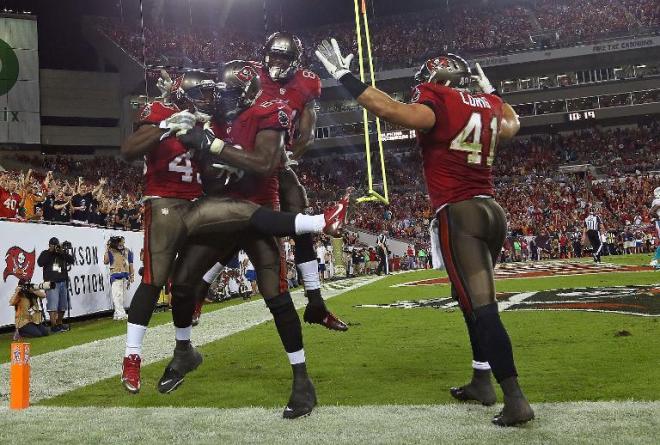 Everyone take a deep breath and savor this one for a little while.

The Buccaneers finally had a lead in the fourth quarter and didn’t blow it. They beat a team that, right now, may have even more problems than they do. This was far from perfect, but these days we’ll take a win any way we can get it.

Maybe we should’ve known it was going to be Tampa Bay’s night when Penn – yes, Penn – caught a touchdown pass in the first quarter, then proceeded to spike the ball over the crossbar. Then there was Lavonte David sacking Ryan Tannehill in the end zone for a safety to put the Bucs up by 12. The defense held the Dolphins to two yards rushing. TWO.

Still, these are the Bucs, and by the end of the third quarter a 15-point lead had turned into a four-point deficit. But Tampa Bay rallied in the fourth quarter with an 80-yard drive, punctuated by Rainey’s long run and short scamper into the end zone. And with the clock winding down, the Bucs sacked Tannehill twice, and Darrelle Revis sealed the deal with an interception downfield. It’s about time they closed out a game.

This was far from perfect. The Bucs had less than 300 yards of total offense. Mike Glennon’s numbers were “meh.” They still had far too many dumb penalties. For much of the night, Mike Tirico and Jon Gruden focused on the bullying scandal within the Dolphins, something I will not get into here. And one win does not change my opinion that Greg Schiano should be fired. But for the first time all season, we the fans finally get to celebrate a victory.

Next weekend, I’ll be at Raymond James Stadium for the game against the Falcons. Next Monday, I’ll be posting my annual (or so I hope) “My Day at Ray-Jay” here on the blog, complete with photos and whatever else I can get my hands on.