Two wins in a row?  Three wins in the last four games?

Yes, the Buccaneers are playing much, much better these days.

They beat the Jaguars today in Jacksonville, converting turnovers into points to build an early lead, then making a big play in the fourth quarter to seal the victory when the Jags were trying to get back in it.

The biggest star of this game?  Look no further than rookie Devin White.  He had an interception that led to a touchdown.  Then he found the end zone when Shaq Barrett stripped the ball from Nick Foles, White picked it up and took it to the house.

Jameis Winston had a ho-hum kind of day.  But he did not turn the ball over, and that is the biggest stat of them all.

Over the last two days, the story for the Bucs has been the defense stepping up and making plays.  Who would’ve thought that?  The Colts come to Ray-Jay next Sunday, and Buccaneer Bri (a.k.a. me) will be there for that one.  I can’t wait.

Here are some random thoughts on the Buccaneers’ 12-8 victory over the Jaguars in the second preseason game.

The offense looks really, really good…..for the most part.  Jameis Winston sizzled in the first half, completing 21 of 29 passes and showing his ability to push the ball downfield.  Of course, there was that awful pass he threw while falling down, that ended up getting picked off in the end zone.  Although the INT was nullified because the refs ruled Winston was down, we can’t have Winston making too many more dumb plays like that.

Doug Martin is making a strong case that he should still be in Tampa when he returns from his suspension.

Mike Evans continues to shine, although he let a sure touchdown go right through his hands.  I was also impressed with rookie tight end O.J. Howard.

The defense also looked strong, stifling the Jacksonville attack for much of the time the regulars were in there.  This unit gave up a lot of big plays last year, and the secondary would’ve been burned for another TD in this contest by Allen Robinson if he had someone other than Blake Bortles as his quarterback.

Nick Folk is the guy now in the kicking game.  He made 2 field goals.  But he also missed one, and had one blocked.  Why can’t we get someone who can make a kick?

The next preseason game is against the Browns at Ray-Jay this weekend. If you watch any exhibition game, make it this one.  The third game is considered the dress rehearsal. 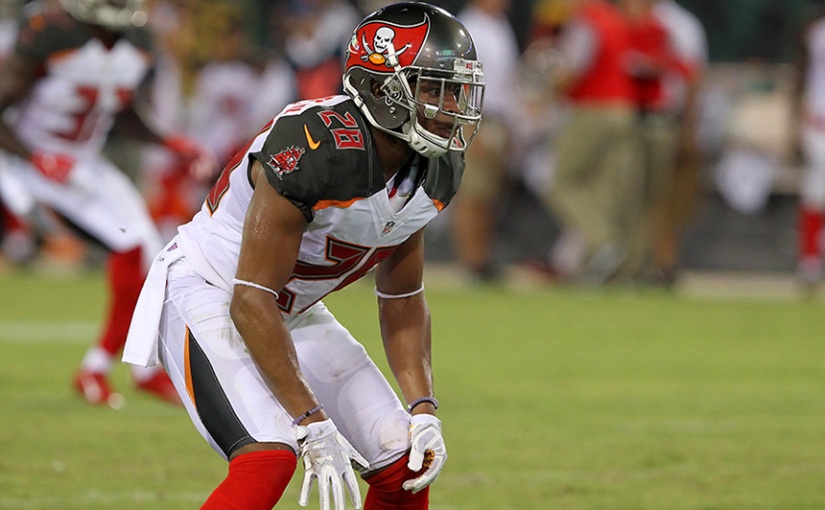 Here are some quick takeaways from the Bucs’ 27-21 victory over the Jaguars in the second preseason game.

THE GOOD
First-round draft pick Vernon Hargreaves III was impressive, intercepting two passes. Granted, neither one came against Jacksonville’s first-team offense, but it was good to see that from a rookie.

Tampa Bay won the game. Who cares if it’s preseason; it’s nice to see the Buccaneers in the win column, though I’ve said many times that you should ignore the final score during these silly games.

THE BAD
It was another sluggish start for the first-teamers, both offensively and defensively. Jameis Winston missed his first six passes and was picked off. He did throw a TD pass to Mike Evans. He finished just 3-of-10.

The defense made Blake Bortles look great. When the starters for both teams were on the field, Jacksonville was the better team.

Roberto Aguayo missed two field goals. Remember: the Bucs used a second-round pick on this guy. Can you imagine the reaction from the fans when he starts pushing – or shanking – kicks once the games count?

Again, it’s only preseason. We didn’t see Doug Martin or Gerald McCoy. Hopefully we’ll see them in the so-called dress rehearsal against the Browns on Friday night.

The Buccaneers have hit their bye week with a record of 2-3. That is considerably better than they were at this time last season. But they’re still not nearly ready to compete with the big boys in the NFL.

That last statement is not a surprise, though. This is a very young team that only won two games in 2014. The biggest thing I’m looking for in 2015 is improvement.

Let’s start with quarterback Jameis Winston, the No. 1 overall pick in this year’s draft. Through five games, he has an equal number of touchdown passes and interceptions (seven of each.) He’s completing 56% of his passes. Sunday’s win against the Jaguars was a nice bounce-back game for him, as he played mistake-free football after being responsible for five turnovers the previous week against Carolina.

The running game has been a positive so far. Don’t look now, but Doug Martin is tied for second in the NFL in rushing yards with 405. He had his best game of the season on Sunday, rushing for 123 yards and three touchdowns (one of them receiving.) That is the Doug Martin we all remember from his rookie year.

Is Mike Evans dealing with a sophomore slump? So far, the answer is yes. He has only 174 yards receiving, though he was injured earlier in the year. Still, the Bucs will need him to revert to last year’s form, and create a formidable tandem with Vincent Jackson.

How about the defense? Here’s an area where if I give a bunch of stats, you’d have no clue whether this unit is really good or really bad. On one hand, the Bucs are eighth in the league in total defense – i.e. yards allowed. They also have 15 sacks. But on the other hand – and this is the one that bothers me – they are dead last in scoring defense. They’ve given up 148 points in five games. They allowed two quarterbacks named Mariota and Bortles to combine to throw eight touchdown passes against them. The secondary in particular has been a sieve. How many times can Tim Jennings blow coverage? And how long can Lovie Smith continue to keep him in the lineup even though he keeps screwing up?

The kicking game was awful through the first four games. Case in point: Kyle Brindza is gone. Connor Barth is back, and he was flawless against the Jags. Thank goodness that issue has been resolved, at least for now.

Looking forward, Tampa Bay needs to keep running the ball, limit mistakes, and make some adjustments on defense, especially in the secondary.

The Buccaneers did something today they hadn’t done in nearly two years: they won a game at Ray-Jay. They beat the Jaguars, 38-31.

Thank you, Doug Martin. He’d actually been running pretty well even before today, but it had been overshadowed by all of the negative stuff surrounding Lovie Smith and company. Today, Martin ran for 123 yards and three touchdowns – one of them receiving. He’s now rushed for over 400 yards through the first five games. He’s looking at a 1,000-yard season if he stays on this pace.

I’m giving Connor Barth a shout-out because of the mess the kicking game had been until now. He was 3-for-3 on field goals and perfect on PAT’s. Everyone take a deep breath now.

Another honorable mention goes to Bobby Rainey for his work on kickoff returns. One of them was a 58-yarder that led to Martin’s touchdown reception.. And for a change, the penalty flags stayed away for the most part on special teams (I think there may have been one.)

How about the defense? Well, at times they let Blake Bortles look like Tom Brady. But they also sacked him six times and picked him off once. And the key play of the game came in the third quarter, when Jacquies Smith recovered a Jacksonville fumble in the end zone to put Tampa Bay back in the lead for good. The Bucs had blown a 13-point lead, then a Barth FG cut the lead to one before the big play happened.

Jameis Winston had a decent day: 13-19, 201 yards and a touchdown. Most importantly, he did not turn it over. The latter is perhaps the biggest thing worth mentioning.

Sure, it was hardly perfect. There were still too many penalties. And I don’t understand Lovie Smith’s stupid play-calling at the end of the first half when he had all three timeouts and decent field position. Oh, by the way: this win may have saved his job for the time being.

A win is a win. We the fans will take them any way we can.

If you’re an out-of-town fan like me, you live for the day when the NFL schedule is released.  Now we can all start planning trips to Tampa et al.

Without further commentary, here is the 2015 Tampa Bay Buccaneers schedule:

A note to my readers: now the draft is over (and you all know who the Bucs picked, from Jameis Winston on down) I will be going into hibernation for a little while until training camp/the preseason gets going.  I am grateful to everyone who reads this blog, and I look forward to reconnecting with you for the 2015 season!

Here’s one thing about this painful-to-watch season for the Tampa Bay Buccaneers. They are in the running for the No. 1 overall pick in next year’s draft.

The Bucs are 2-11 right now, and are tied with the Jets, Titans, Jaguars and Raiders for the worst record in the NFL. As of this writing, Tampa Bay would own the top pick due to strength of schedule (or lack thereof.) Anyway, it’s some tiebreaker that could change between now and the end of the regular season.

The Buccaneers need a quarterback – badly. Oregon QB Marcus Mariota, who was named a finalist for the Heisman trophy on Monday night, is the name that keeps popping up. If he is still available whenever Tampa Bay is on the clock, the Bucs need to grab him. But taking Mariota will not solve the problems for an offense that has been painful that has trouble just scoring 20 points in a game.

Mariota won’t do well in Tampa if nobody can protect for him. The offensive line, which was overhauled before the season, needs to be revamped again. As bad as Josh McCown has been this year, I would argue that the guys in charge of protecting the quarterback have been the biggest disappointment in 2014. Players like Evan Dietrich-Smith, Anthony Collins, Oniel Cousins, Demar Dotson have not produced. And Logan Mankins – who was acquired before the season began – has only made headlines when he gets called for holding. They are also partly responsible for the abysmal running game. Tampa Bay is 31st in rushing yards, averaging only 78 yards per game.

So for all the fans (including me) who would love to see Mariota in a Bucs uniform, I say bring it on. But let’s hope Lovie Smith and Jason Licht also draft some guys who can do damage in the trenches.