I had a bad feeling about this game even before it started.

First, the bottom line: the Bucs can no longer win the NFC South, and they would need the mightiest of miracles to get a wild card. They spent their Christmas Eve by losing to the Saints in the Superdome, 31-24.

Let’s look at the reasons why Tampa Bay lost this game. First, the defense did a 180 from the way it played against Drew Brees and company two weeks ago. When I saw them in person, the Bucs picked him off three times. On Christmas Eve, Brees shredded the defense like other teams did in the first half of the season. They also allowed over 120 yards on the ground, including two TD runs by Mark Ingram. It was one big play after another for the explosive Saints’ offense.

How about that sequence at the start of the second half? Remind me again why Josh Huff is still on this team. He screwed up another kickoff, pinning the Bucs back near their goal line. Before you could blink, Jameis Winston threw a floater that was picked off, and Ingram was back in the end zone on the very next play. A six point halftime deficit was suddenly 13, and the Buccaneers never recovered.

Winston also threw another pick in the third quarter when the Bucs were in New Orleans territory.

It’s easy to second-guess, but I question Dirk Koetter’s decision to go for the onside kick with 2 minutes to go. The Bucs had all three timeouts left. You figure the kickoff would result in a touchback, so they wouldn’t lose any time there. They could’ve stopped the Saints in their territory, burned their timeouts, and gotten the ball back in decent field position with one last shot. In the end, it didn’t matter because the Saints got a first down. But even if they had stopped him, Tampa Bay would’ve had a much longer way to go after the Saints’ punt.

Now, back to the bad feeling I had before the game started. It came as a surprise to me – and apparently the players from what I’ve read – to find out that starting running back Doug Martin was inactive, and that it was a coaches’ decision. We don’t know the truth as of this writing, but I sure hope Koetter had a good reason to bench his starting running back with the team’s playoff chances hanging in the balance. Martin has not been the same as last season; there’s no question about that. But I’d love to know the back story behind all of this.

So, we have one more game to go. The Buccaneers host the Panthers in the season finale. There is some ridiculous scenario that would allow the Bucs to back into the playoffs next weekend, but it’s not likely. But if Tampa Bay is going to be a playoff team down the road, it has to win games like the one Saturday night. It’s as simple as that.

Here are some videos and pictures I took at Sunday’s game against the Saints.  I hope you enjoy them.

Note: for my Facebook friends, you’ve already seen the photos. 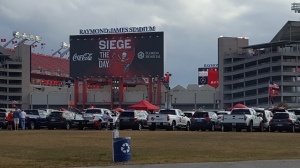 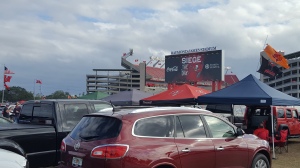 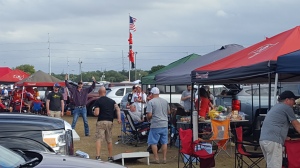 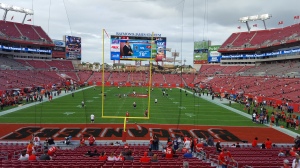 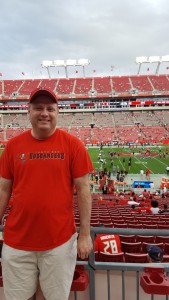 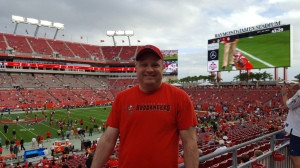 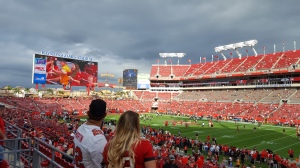 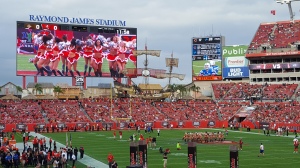 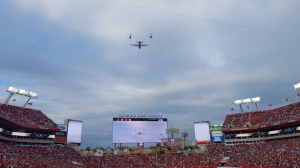 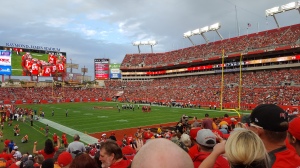 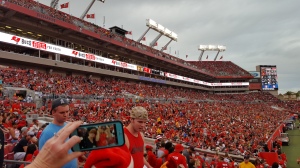 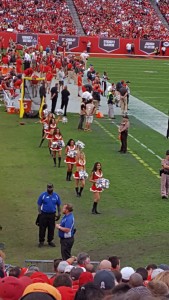 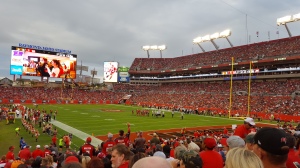 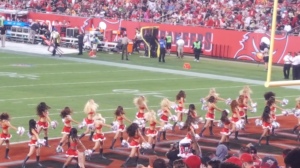 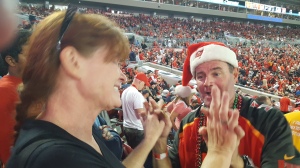 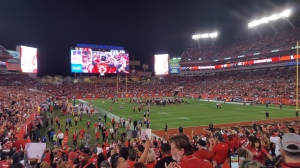 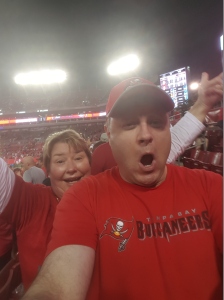 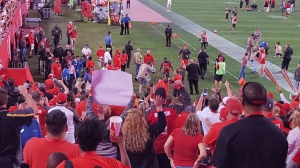 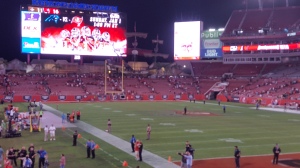 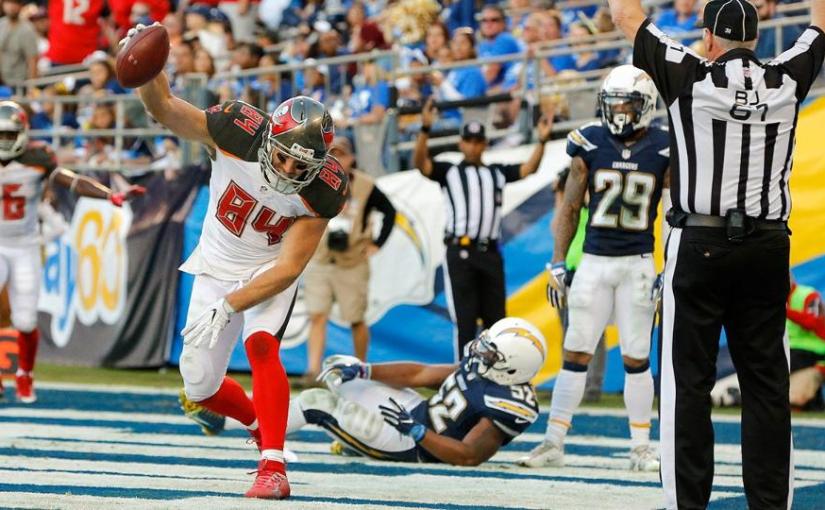 If the season ended today, the Buccaneers would be in the playoffs as the #6 seed in the NFC.

I hate the dreaded phrase “if the season ended today,” even when it applies to the Bucs. There are still four games left, and things can (and will) change.

Let’s start with the obvious: if the Bucs run the table the rest of the way, they will be in the playoffs as at least a wild card.

But they’ve got their sights set on winning the division. Right now, they’re tied with the Falcons at 7-5 atop the NFC South. Tampa Bay has a tougher schedule the rest of the way, since it has to play Dallas (that game has been moved to prime time in case you haven’t heard.) Atlanta does not play a team with a winning record the rest of the way. If what I just read on the team’s official website is true, if the Bucs and Falcons both win out, Atlanta would win the division based on record against “common opponents.”

That’s way too complicated for me, but anyway…

It is also my sense that the Bucs are still not getting much national attention, though that is slowly starting to change.

The final push to the postseason starts with Sunday’s game against the Saints at Ray-Jay. I will be there to see it in person. A quick check of Ticketmaster finds there are still a LOT of seats available, especially in the upper deck on both sides. Dear Bucs fans: I know you’ve been hesitant to support the team in recent years because they’ve been lousy. That’s not the case right now. This is a very big game. There is no excuse for the stadium not to be sold out. Let’s fill the place up on Sunday.

Now that the NFL draft is in the books, it’s time to take a look at the newest Buccaneers. By now, you probably know who Tampa Bay chose. Also, I’m no draft analyst, nor do I really follow big-time national college football. So with the disclaimer out of the way, let’s look at what the Bucs did.

I’m glad the Bucs focused on the defensive side of the ball. That’s the reason Lovie Smith is no longer the head coach. The first-round pick generally garners the most attention, so I’ll do the same. Vernon Hargreaves III played cornerback at Florida. Tampa Bay needs people to do a better job defending the pass. So this pick makes a lot of sense. Remember the percentage at which opposing QB’s were completing passes against this defense last year? I don’t, but I know it was way up there. And some of those quarterbacks weren’t exactly superstars.

In the second round, they took Noah Spence. Lord knows the Bucs need a pass rusher, or two, or three, or….well, you get the idea. So that was a good move as well.

They also drafted a kicker in the second round, Roberto Aguayo out of Florida State. This is the move that seems to be getting the most criticism, especially since Tampa Bay traded up to get him. From what I’ve read, this guy was money from inside 40 yards. Okay, so what happens when he comes on to try a 50-yarder with the game on the line? I’ll take a wait-and-see approach on this. The Bucs kicking game has been wobbly at best over the past couple of years. Let’s see what happens.

Those are my thoughts. I won’t dissect the other picks because, as I alluded to earlier, I just don’t know enough about their college careers. But I was pleased to see the defense be the priority in this year’s draft.

So a lot of the so-called experts thought Lovie Smith would be on the hot seat at the start of next season.

Guess what?  His seat is now open.

The Bucs fired Lovie last night after two disappointing seasons in which he only won 8 games.

I love how the national media are “stunned” by this.  To me, the only surprising element is that Tampa Bay chose 10pm on a Wednesday night to make the move.

Clearly, the others just looked at the Bucs being ranked in the top 10 in total offense and defense.  They obviously didn’t actually pay attention to what happened in the Red Zone, or the record-setting number of penalties.

I’ll have more to say a bit later.  For now. I say that I agree with this move. 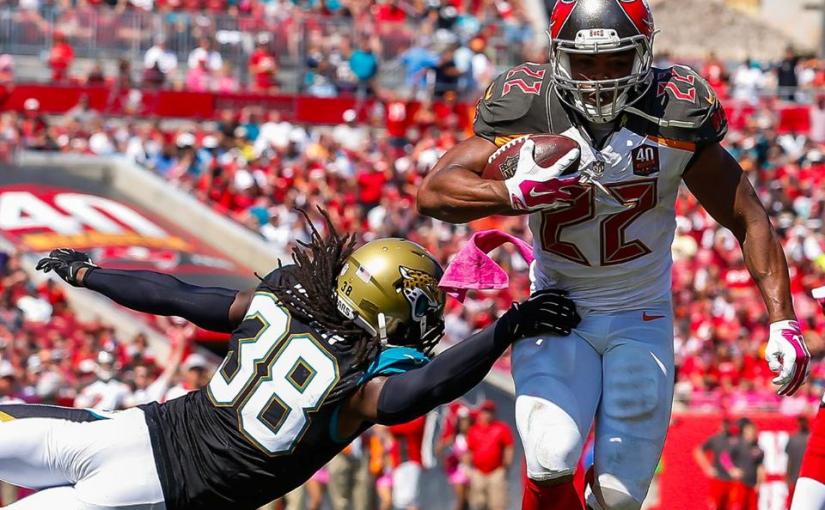 The Buccaneers did something today they hadn’t done in nearly two years: they won a game at Ray-Jay. They beat the Jaguars, 38-31.

Thank you, Doug Martin. He’d actually been running pretty well even before today, but it had been overshadowed by all of the negative stuff surrounding Lovie Smith and company. Today, Martin ran for 123 yards and three touchdowns – one of them receiving. He’s now rushed for over 400 yards through the first five games. He’s looking at a 1,000-yard season if he stays on this pace.

I’m giving Connor Barth a shout-out because of the mess the kicking game had been until now. He was 3-for-3 on field goals and perfect on PAT’s. Everyone take a deep breath now.

Another honorable mention goes to Bobby Rainey for his work on kickoff returns. One of them was a 58-yarder that led to Martin’s touchdown reception.. And for a change, the penalty flags stayed away for the most part on special teams (I think there may have been one.)

How about the defense? Well, at times they let Blake Bortles look like Tom Brady. But they also sacked him six times and picked him off once. And the key play of the game came in the third quarter, when Jacquies Smith recovered a Jacksonville fumble in the end zone to put Tampa Bay back in the lead for good. The Bucs had blown a 13-point lead, then a Barth FG cut the lead to one before the big play happened.

Jameis Winston had a decent day: 13-19, 201 yards and a touchdown. Most importantly, he did not turn it over. The latter is perhaps the biggest thing worth mentioning.

Sure, it was hardly perfect. There were still too many penalties. And I don’t understand Lovie Smith’s stupid play-calling at the end of the first half when he had all three timeouts and decent field position. Oh, by the way: this win may have saved his job for the time being.

A win is a win. We the fans will take them any way we can.

The Bucs took action this morning to fix their major kicking problems. Their new kicker is Connor Barth. Sound familiar? It should; Barth was the team’s kicker for the previous six years, and a pretty darn good one at that.  He is the team’s all-time leader in field goal percentage.

Below is the official release, courtesy of buccaneers.com

“On Tuesday, the Buccaneers announced that they have signed kicker Connor Barth. The moves comes after the team released rookie Kyle Brindza, who had been the team’ starter through their first four games.

Barth, a seven-year veteran, spent most of his NFL career with the Buccaneers. He was the team’s kicker from 2009 to 2014 after playing with the Chiefs his rookie season. Barth has connected on 116 of 136 field goals in his career, 83 percent of his kicks. He’s missed just four times when attempting kicks shorter than 40 yards, converting on 63 of 67 attempts.

Barth was brought in by the Buccaneers during training camp to compete with Brindza, but the team ultimately decided to go with the rookie for the first quarter of the season. Barth had been a free agent until returning to Tampa Bay.”